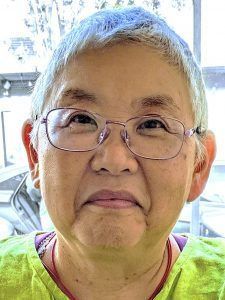 Patricia Mushim Ikeda is an author, diversity, equity and inclusion consultant, Buddhist teacher, and secular mindfulness teacher based in Oakland, California, USA. She began publishing poetry under the name “Patricia Y. Ikeda” in the late seventies in the U.S. and is one of the major Asian American women poets featured in the 2001 award-winning documentary, Between the Lines. After earning an MFA degree from the University of Iowa Graduate Writers Workshop in 1981, she jumped the tracks and veered into Zen Buddhist meditation, entering a period of North American monastic practice under a vow of poverty that culminated in 8 months in Korean monasteries. Returning to California in 1988, she re-entered lay life with the birth of her son in 1989. Assisting teachers in her child’s under-resourced public schools in Oakland proved to be a journey of diversity awareness. Mentored by diversity consultant Roberto Almanzán, Mushim began working as a diversity consultant in addition to Buddhist teaching and writing, and since 2007 has become widely recognized for social justice activism and sustainability and inclusivity work in U.S. Buddhist communities as well as in the secular mindfulness movement. Mushim received the 2014 Gil A. Lopez peacemaker award from the Association for Dispute Resolution of Northern California in recognition for groundbreaking work training social justice activists in mindfulness practices at the East Bay Meditation Center, which serves underrepresented communities and has a social justice-centered mission. In 2015 she received an honorary doctor of sacred theology degree from Starr King School for the Ministry and was part of a small group of U.S. Buddhist and Catholic socially-engaged leaders who met with Pope Francis during an interreligious dialogue convened by the Vatican. She is also the recipient of a Global Diversity Leadership Award from the HRD Congress in Mumbai, India. Mushim is a longtime member of the Diversity 2000 think tank. Her essay, “I Vow Not to Burn Out” went viral and has been republished online many times, and has recently been published in the anthology True Peace Work (Parallax Press).